A one-day conference organised by the Alice Ruggles Trust in collaboration with the Department of Criminology, University of Leicester and with the support of Gateshead Community Safety Board

Risk management in stalking needs to bring together a range of expertise. Our conference aimed to highlight current best practice and current academic research, and to explore better ways of coordinating them by bringing together a range of practitioners and academics. We also sought to highlight progress that had been made both in the 3 years since Alice’s death and in the 6 months since the release of her Domestic Homcide Review.

It was a tremendous day. We were delighted to have a fine array of keynote speakers and workshop chairs, and exactly the mixed audience we were hoping for, including police (from 14 different forces), CPS prosecutors, magistrates, probation officers, representatives of local councils, stalking charities, community support and the NHS, and academic criminologists and forensic psychologists, together with our student helpers from the Criminology Department at Leicester.

The feedback was extremely positive, with a number of requests and constructive suggestions for similar events in the future. 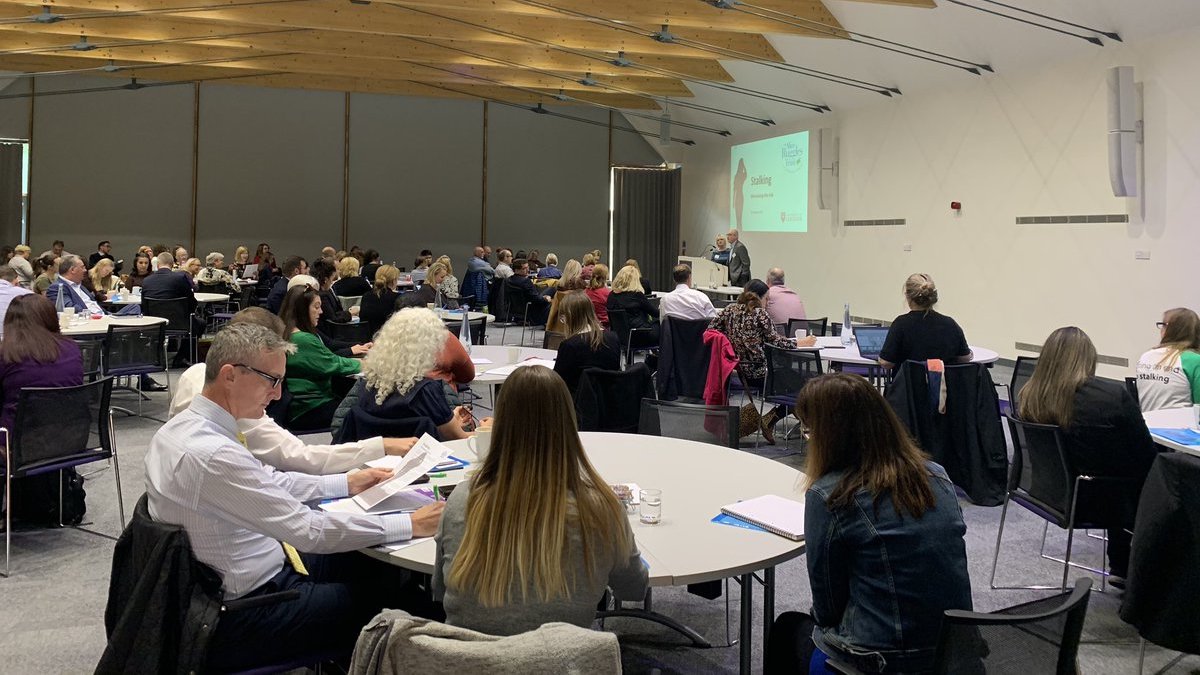 Alice Ruggles was murdered by her ex-partner on October 12, 2016 following a relentless campaign of stalking. Alice's case featured quite extensively in the local and national media and has been the subject of three TV documentaries. The Alice Ruggles Trust, set up by Alice's family, is raising both professional and public awareness as well as campaigning for improved legal measures in dealing with stalking.

The Domestic Homicide Review into Alice’s case, published in March 2019, identifies numerous failings by the police, army and other agencies and contains a range of recommendations at the local and national level, including for the Home Office and MoD.

Practitioner conferences and professional training sessions typically make reference to well established guiding principles such as Paul Mullen and Troy McEwan’s Stalking Risk Profile, and recent research such as Jane Monckton-Smith’s Intimate Partner Femicide Timeline. However, risk management in stalking is a very complex field bringing together different cross-disciplinary approaches, and it is clear that current practice could be better integrated with current academic research across the board.

Lorraine Sheridan: “What do stalking victims need? Some practical advice”
Lorraine is Senior Lecturer in Psychology at Curtin University, Perth, Australia, is a forensic psychologist and internationally renowned expert on stalking. Together with Karl Roberts, she authored the original Stalking Screening Tool used by police forces across the UK. Lorraine is a Leicester graduate and lectured at the University between 2000 and 2007.

Karen Morgan-Read: “Tackling stalking together”
Karen is the Violence Against Women and Girls Strategy Manager and Senior Policy Advisor at the Crown Prosecution Service. Her presentation will discuss the importance of working together to improve the response of the Criminal Justice System so that stalking is recognised for what it is, thus enabling victims to be better protected and perpetrators to be appropriately managed. Karen will discuss the steps that have already been taken and outline what is being done to continue this improvement. She will also cover the main points of the forthcoming Stalking Protection Orders.

Jane Monckton-Smith: “The Intimate Partner Homicide Timeline”
Jane is Senior Lecturer in Criminology at the University of Gloucestershire, specialising in homicide, stalking and coercive control. Her model identifying eight stages in the progression to intimate partner homicide was featured in the national media in August following its academic publication.

The conference featured six workshop sessions focusing on more specific topics. These ran in parallel twice over, so that each delegate could attend two of them. Workshop chairs were asked to spend a few minutes setting the scene and then lead a structured discussion on various issues, ensuring that as many people as possible got a chance to contribute. The topics and chairs/co-chairs were:

The role of multiple agencies in risk management

Dan Price-Jones is an NHS Consultant Forensic Psychologist who works full time in Cheshire Constabulary’s Integrated Anti-Stalking Unit (IASU). Dan’s clinical background is within both secure hospital and community settings, working particularly with adults with an intellectual disability who present with diverse risk and offending behaviours.  His passion for the practical application of psychological knowledge informed the creation, development and establishment of the IASU.

Karl Roberts is Professor and Chair of Policing and Criminal Justice at the University of Western Sydney, Australia. His research focuses upon the behavioural assessment of offenders, investigative interviewing by law enforcement, and risk assessment and risk management. Together with Lorraine Sheridan, he developed the original stalking screening tool for use by law enforcement and other agencies which became the standard stalking risk identification tool for all UK Police forces.

Richie Allen is a Superintendent in Durham Constabulary and is responsible for Neighbourhood Policing, Harm Reduction and Public Order. He is the force’s strategic lead for stalking and harassment. His background is in uniform policing and intentionally uses this to drive Durham’s focus of identifying stalking at the first port of call, be it by identifying it from an initial call to police or report to a police officer.

Emma Kay is an Inspector within Durham Constabulary. She is the operational lead on Stalking and Harassment within Durham Constabulary and has created the training packages and roll out of Stalking training within the force. Alongside the Alice Ruggles Trust, she has set up a project to roll out education in schools around unhealthy relationships and stalking. She has worked in response policing, safeguarding, control room and is currently the Neighbourhood Inspector for Peterlee. Emma has been selected for the first Leadership and Talent scheme that was launched in Durham Police in 2018.

Stuart Douglass is Lead Policy Officer for Community Safety and Safeguarding at Sunderland City Council and was Alice’s DHR Chair. He has worked in the field of Safer Communities and Safeguarding for 30 years and has been an adviser to the Local Government Association since 1997.

Tricia Bernal is co-founder of Protection Against Stalking. Since her daughter Clare was stalked and murdered in 2005, Tricia has been a major campaigner in identifying ways to protect the lives of stalking victims and hold offenders to account. she has also worked for the peer-support charity AAFDA for seven years as a family support worker and advocate.

Jo McIntyre is the Development Officer for AAFDA. She has been employed in the domestic abuse sector for 13 years, first at Thames Valley Police, then as Domestic Abuse (Reduction) Coordinator for two Local Authority areas. She also co-founded a charity that offers free legal advice to anyone experiencing domestic abuse in the West Berkshire and surrounding areas.

Breaking the silence—challenges faced by employers in tackling stalking

Suky Bhaker is Acting CEO at the Suzy Lamplugh Trust. She has spent 15 years working in front-line services in the public, NGO and charity sectors to tackle gender-based violence in the UK and abroad, as well as in policy, research and development relating to stalking, honour-based violence, domestic and sexual violence, and trafficking. Suky has recently been seconded from the Trust as an adviser to the Parliamentary Security Department, supporting and advising MPs and their staff in issues relating to personal safety, stalking and harassment.

Emma Hildreth is the Project Manager for the Multi-Agency Stalking Intervention Programme (MASIP) at the Suzy Lamplugh Trust. Prior to this, Emma worked across the public and voluntary sector in a range of roles, most recently as the Communities Manager for Northamptonshire Police and Northamptonshire County Council, developing partnership working in areas such as domestic abuse and modern slavery, as well as managing the county Coroner’s Service.

Jan Berry is a retired senior police officer and the former Chair of the Police Federation. Today she is a strategic adviser to the charity Protection Against Stalking, a Trustee with DAVSS (West Kent domestic abuse charity), and a volunteer advisor to the families of police officers who died on duty.

Adrian Scott is a Senior Lecturer at Goldsmiths, University of London, and a Chartered Psychologist with Associate Fellow Status within the British Psychological Society. He has a broad interest in forensic psychology, specialising in the areas of stalking, image-based sexual abuse, investigative interviewing and eyewitness testimony.

Liz Yardley is Professor of Criminology at Birmingham City University. Her research focuses on the political economy of violence, with a specific emphasis on technology-facilitated abuse in cases of homicide.

Louise is the Young People’s ISAC at Paladin National Stalking Advocacy Service, focusing on how we support and engage young victims/survivors of stalking. A qualified youth and community worker, she has been working with young people for the last 20 years through statutory and third sector organisations, and has spent 12 years developing services for young people who have experienced domestic abuse within their families or through their own relationships.

Zing Tsjeng is the UK editor of Broadly, a digital platform focusing on women’s issues, which, as part of their 2018 “Unfollow Me” campaign, produced a short video telling Alice’s story that has been shared on social media by over a million young people.

Sue Hills is Alice Ruggles’ mother. Along with Alice’s father Clive and brother Nick, Sue set up the Alice Ruggles Trust in 2017 to raise awareness of stalking and coercive behaviour. In 2019, the Trust commissioned a set of resources to be used in schools so that pupils could learn about healthy relationships and stalking. Sue has delivered talks to school and university pupils, youth groups, the police and the CPS. She is actively involved in campaigning to change the law to protect victims and to manage perpetrators effectively.

Clive Ruggles, Alice’s father, led the final plenary session drawing together the conclusions and recommendations of the various workshops. Clive has spoken at numerous training and development sessions for the police, CPS and judiciary as well as related services, and has played a leading role in the public awareness raising and campaigning work of the Alice Ruggles Trust.

All three of our keynote speakers kindly agreed to make their PowerPoint slides available on the Trust website. These can be downloaded by clicking on the links below:

Stamford Court at University of Leicester, where the conference was held

Stamford Court is a dedicated conference centre in delightful surroundings in the outskirts of the city (Oadby), to which we had full and exclusive use of throughout the day. Its main hall (shown in the picture) and several smaller training rooms were ideal for our plenaries, break-out panel sessions and informal discussions. We hope to return to this venue in the future.